Do we need a softener and filter on city water?

I get this question all the time. I say, yes!...and not only because I run a water treatment business and I want to sell water softeners and filters. I have been fixing water for over 7 years and have done well over1000 water tests in North Dakota and Minnesota, testing the water we drink and bathe in everyday. I've seen water so bad that pipes and appliances have completely froze up with minerals. I've met people with an orange tint to the clothes and hair due to the iron in the water. I've seen water you could light on fire due to methane gas in the water aquifer and the singed eyebrows of the home owner showing off to his friends...And a young couple sick with arsenic poisoning due to not getting their water tested regularly.

Granted these are problems facing customers on a well and out of city limits.

But what about city/rural water?

No. we don't have bacteria,

swampy or rotten egg smells in city/rural water. But we do deal with things that make potable water a nuisance and problematic, e.g. Calcium, iron, and chemicals...including chlorine and chloramine...among others. According to the WQA, Water Quality Association, 10.5 grains per gallon of hardness is considered extremely hard. Fargo/ West Fargo is 8-10 gpg according to my tests, seems to vary on location, Moorhead 7gpg, Cass Rural 15-18gpg, Detroit Lakes, MN 18-21gpg, and I do have tests for other municipalities, please call 701-552-0969 or email dakotawaterpro@gmail.com for test results...or a FREE water test.

Where does our water come from?

In Fargo/West Fargo our main source of water is from the Red River. On average 11 million gallons are treated per day and up to 23 million gallons at peak time, according to the Fargo treatment website. That is a lot of water to treat, plus think of the things the plant is treating. I call water the universal solvent and the Red River obviously contains but also picks up contaminants; industry and farming run-off, chemicals sprayed on the roads, pesticides and other hazardous materials before it goes through the treatment plant. According to the reports, Fargo water is filtered and under EPA standards of maximum contamination levels, but still contains lead, nitrate-nitrite's and arsenic when it reaches our homes. Get a water filter or be one...Right?

Back to the hardness and iron levels in the water... our water is considered hard to very hard and this can and does build up in pipes, appliances, fixtures, dries skin, and breaks down clothes. The iron I test is between a trace and 1ppm, but it doesn't take much to stain items. To be continued...

Check back soon
Once posts are published, you’ll see them here. 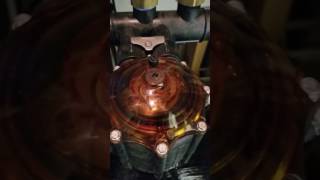 How to regenerate your SUMO III Water Softener

Do we need a softener and filter on city water?